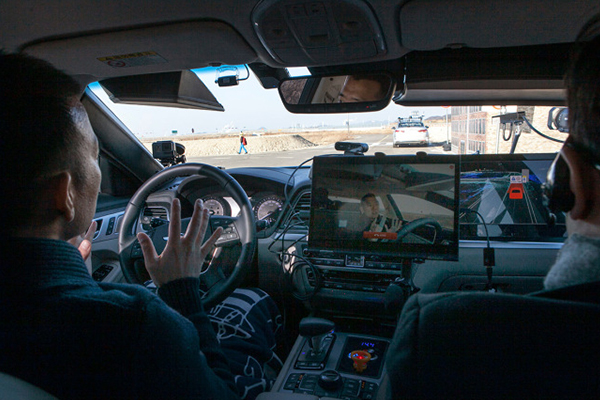 A self-driving car comes to a stop on its own when it is alerted about a child identified in the blind spot based on 5G and HD map systems.

SK Telecom said it has successfully carried out the world’s first demonstration of direct mobile communication between self-driving cars on a 5G network, allowing motor vehicles to avoid collisions or other road accidents without any human involvement.

The 5G communication-based self-driving technology is expected to be applied on major roads in Korea from 2019.

To date, self-driving tests have been focused on the ability of a self-driving car to identify and avoid ordinary cars and road obstacles using cameras and sensors.

During the latest demonstration, two 5G self-driving vehicles developed by SK Telecom and the Korea Transportation Safety Authority (KOTSA) exchanged traffic information while running on a 2km track at K-City,

a test site for self-driving cars in Hwaseong, Gyeonggi.

The test site has a variety of test driving lanes that resemble real-world driving conditions including a school zone and bus-only lane. 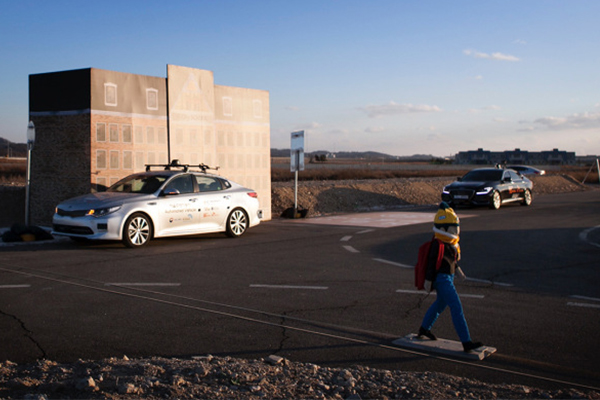 The vehicles recognized the school zone and automatically reduced the speed. When a model child jumped out onto the road, a CCTV system on the street lamp immediately identified the pedestrian and alerted warnings to the running cars on the 5G network, bringing them to an immediate stop. After the pedestrian crossed the road, the two cars resumed operations. It took only 0.001 second for the two cars to stop after being alerted.

When multiple collision accidents occurred at the highway exit, a preceding car automatically delivered the information to a following vehicle and the control center. Upon the information, the following car changed the driving lane and passed the accident spot safely. At a no-signal intersection, the two cars communicated with the control center on a 5G network and automatically decided who would pass first.

In the demonstration, SK Telecom and the KOTSA also released an HD map that indicated lanes, traffic signs and lights at K-City in centimeter units.

Real-time traffic information such as location of other cars, signals, road construction or accidents are reflected in the map in real time, helping the autonomous driving vehicles make a driving decision even in special environments such as bad weather and night time when camera and sensor performance is degraded.

By Kim Gyu-sik and Minu Kim