KHNP said it has signed a memorandum of understanding with Hwaseong Solar Energy, a local renewable energy firm, to develop the floating 100 megawatt-capacity solar power plant in Hwaseong, 70 kilometers southwest of Seoul.

The project aims to place an array of photovoltaic panels on a structure that floats on Hwaseong Lake, a manmade lake on the western coast.

The state utility firm said it has signed a long-term lease with the provincial government to use 861,000 square meters of the lake, or 8.3 percent of the site.

The 220 billion won (US$202 million) project is part of KHNP’s plan to invest 10 trillion won by 2030 to expand renewable energy sources, including solar and wind power. 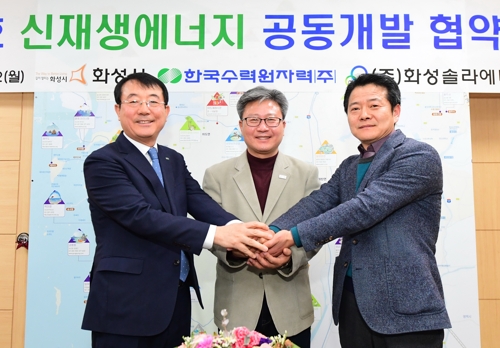 Representatives of Korea Hydro & Nuclear Power, Hwaseong Solar Energy and Hwaseong City Government pose for the camera after signing a memorandum of understanding on Feb. 12, 2018, to build a floating solar farm on Hwaseong Lake on South Korea’s westesrn coast in this photo provided by KHNP. (Yonhap)